Posted by Kat (Resto is Epic)

Over this last week I have been trying to tackle what has been (for me) a pretty major issue, problem or whatever you wish to term it – my UI. I like having a relatively pretty interface to work with, as well as something that’s practical. So far I have played about with bartender, stuf, TUKUI, fortexorcist, sexymap and various other things to try and rearrange layout and change skins etc. So far nothing has quite been right, I have either had a pretty UI or a very sparse but functional one – not both together.

However, after seeing Icedragon’s amazing resto UI, I was inspired to create my own along the same lines and to post up what I use and why. All credit for inspiration has to go to ice for my new UI as I have most definitely tried to do it similarly and then simply edited and tweaked it to my specific needs and preferences. 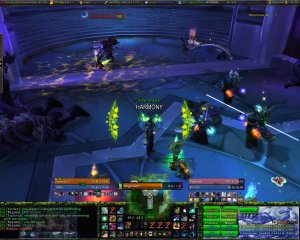 Kat’s UI in a raid

Layout and Cosmetic Addons
These are the bare bones of the UI and the addons that actually change appearance, positioning etc of the various aspects.

Sunn Art (modifies Viewport) – This is a nice little addon that allows you have background art ready to overlay with bars and such. The files are .tga meaning they can be edited quite easily (I just used Paint Shop Pro). I had a little trouble trying to get them accepted by the addon, so I cheated and deleted one of the basic skins (tribal) and renamed the 3 bars tribal1, tribal2 and tribal3 then selected the tribal theme within SA.

Chatter (modifies Chat) – My chat box is altered slightly using the Chatter addon. This gives you much more control over sizing and such than the basic settings. Additionally you can link click and such as well. Very powerful for such a small addon.

Bartender (modifies action bars) – The bars are all altered and rearranged using bartender. This is very simple to use and allows you to change the size of a bar (12×1 buttons, or 3×4 buttons, or 2×6 and so so) as well as the scale of the buttons. This means that you can make any layout fit into any space. Mine is set with 2 bars altered to 3×4 and one to 5×1. You can also turn on/off the xp bar, stance bars, pet bars and so on.

SexyMap (modifies Minimap) –  Very simply, SM lets you change the look, scale and a few options of your minimap. The selected profile is “Emerald Portal” as it looks very druidy and pretty. You can add coo-ordinates, have buttons only appear when you hover over the map and an assortment of other nice features.

SUF (Shadowed Unit Frames) (modifies Unit Frames) – SUF grants an excellent array of options to your unit frames, allowing all kinds of resizing, text options, repositioning and such. I have found it much simpler and easier to use than any similar addons I have tried.

Coolline – The horizontal bar below Kat is coolline. This is a tracker for CDs and simply shows the icon for the ability/spell/item or whatever and it moves from right to left as the CD lowers. When it finishes, the icon expands and flashes to show you it is ready.

TitanPanel – Titanpanel is the thin bar across the top of the screen. It has many plugins and can be set to display a host of info. Atm I have it showing total gold, druability (and how much the next repair bill will be), FPS, latency and a few other things.

Spell and casting addons
These addons are generally designed to make healing quicker or easier to perform.

Power Auras – Above Kat’s head are the words “swiftmend” and “harmony”, these are both placed there by power auras. PA allows you to specify certain conditions that you wish to be alerted to. You can have these alerts either as text (like I do) or as a graphic. The two I have are; showing the word “swiftmend” when SM isn’t on CD (i.e when I can use it) and showing the word “harmony” when my harmony buff is active. It is a little clunky and something I need to make better, so I am looking at trying to incorporate the harmony buff into the bouquets on Vuhdo if it’s possible.

VuhDo – Vuhdo is the raid frames addon in the bottom right corner of the screen. It is a very powerful addon and basically makes healing so much simpler. It can be configured to any size of party and then saved (this is my solo/5 man/10 man scale, I have another much more compact one that auto loads in 40 mans). You can track buffs, debuffs, HoTs and various other things as well as having warnings for all kinds of stuff as well as using all the healing spells and such simply by clicking on the box of your target. These mouse clicks can also be modified by shift, ctrl and alt to give you a huge combo to choose from. Simply put – it’s the best healing addon I have ever used.

Deadly Boss Mods – Deadly isn’t visible on the screenshot, but during boss fights it activates and basically pops up little timers regarding boss abilities (e.g. a bar showing how long until Magmaw next cast Mangle) as well as telling you when you you need to do certain things (e.g. big letters in the middle of the screen that say “GET OUT OF THE FIRE” while an alarm sounds).

Recount – This tracks overall damage, done, DPS, HPS, overhealing, deaths and whole bunch of other stuff. You can order by fight, total in this session and such as well as seeing what percentage of damage or healing came from which spells and so on. Very useful if you trying to watch your over healing and checking how much you are using certain spells.

I do use various other addons, but they are not relevant to a resto based UI, so I have only listed those I think may be helpful to fellow druids.

If anyone has any questions please feel free to ask and also I want to hear what other people use in case there is something that could be beneficial to others.