← 20 days of WoW blogging – My first day in wow
Mists of Pandaria: Talent and abilities preview →

Kat’s thank you to everyone out there

Posted by Kat (Resto is Epic)

um, errr, ok, not sure how to really start this tbh.

As a Brit I don’t actually entirely know what thanksgiving is about – my education on this US and Canadian holiday is based solely around Pilgrim’s Bounty in WoW. Given the achievements in game and what you have to do I gather that it entails chasing vast quantities of turkeys around and eating huge piles of food (while possibly throwing it at each other as well). How true are the tables? Do you travel from Chicago to New York to sit around their tables? Isn’t it a bit busy by the side of the road?

hmm, maybe I got this wrong, gimme a minute to go to the interwebz font of all knowledge (i.e. Wikipedia).

So apparently I got it wrong 😦 You don’t specifically chase turkeys around, but you do eat lots of food. Ok, I can live with that.

So then, Thanksgiving, hmm, what’s the core idea here I wonder? (editor: /slap, Giving Thanks might be a good start!). Ok, ok, I get that thanksgiving is about giving thanks.

Well, as this has been a busy year for Kat, both in game and online I actually have quite a list of thanks to be giving. They range from blog sites to individuals, who between them have helped me get Resto is Epic off the ground, or aided me in game somehow or just been plain helpful in general.

So in no particular order, here are some of  the people I wish I could send a turkey to 😀

Icedragon from Druid Main – One of the first blogs I read for “fun” rather than just for info. Ice was also the very first person to tell me what she thought of my resto druid guide – the fact she thought it was “great” was a big positive when I had just started 🙂 Later on, her awesome post on her UI was inspiration for my own, when despite requests for a copy of it, I had to go and hunt down the various bits myself and learn how to use them – ultimately much more useful than simply extracting someone else’s files. Finally, Ice doesn’t pull any punches if she thinks something is substandard, but equally will praise something she likes – so I know any thoughts she has given me about the design etc of RiE are true and neither bitchy for the sake of it, nor placating because I am still a relatively new blogger on the scene. Thanks Ice 🙂

Jasyla from Cannot be Tamed – Despite starting raiding in Wrath, I never really scrutinised WoL and such until we started T12 content. Not only did Jasyla’s page on analysing WoL reports really help me identify where I needed to improve, but her section on druid Power Aura’s has also immensely improved my healing on Kat and I have no doubt that some of our Firelands fights would have been a lot harder if it wasn’t for those. Additionally, when I first starting recording logs and checking them, Jasyla actually took the time to go through mine and point out the areas that were good and where I needed to improve. Also, when I first started out with “serious” resto healing, her guide was easy to read and very informative to someone just starting to get a proper grip on gearing and raid healing. Thanks Jasyla 🙂

Vidyala from Manalicious – As well as some awesome blog posts that generally seem to be able to give an clear perspective on things that other people (including me) are raging about, Vidyala is also the artist behind my awesome little avatar pic of Kat, taking me one step closer to having a nice little bundle of unique stuff instead of generic pics and such. So, for helping me keep perspective over nerfs and stuff, and the awesome pic; Thanks Vid 🙂

Beruthiel from Falling Leaves and Wings / Twisted Nether Blog – Along with Cannot be Tamed, Beru’s blog Falling Leaves and Wings has been very good at both inspiring me to write certain posts, as well as supplying all kinds of useful in game information and yet more power auras 😀 Also, through TNB Beru was one of the first people to actually get my blog featured somewhere that improved traffic. Barely a month after I started RiE, she asked if I minded RiE being put on the TNB Welcome Wagon – hmm let me think for a minute, a new blog getting free promotion on TNB – YES PLEASE! 😀 Thanks Beru 🙂

Everyone at MMO Melting Pot – I said above that Beru and TNB were one of the first places to feature RiE, well MMO Melting Pot was the first. Only a few days after I started I suddenly found a ping back from MMOMP and saw that I had been included in their round up of new blogs, since then a few other of my posts have been included in their round ups and I have received a good bit of traffic from them. Everyone likes more traffic to their pages, as well as being included on other peoples lists, Thanks MMOMP 🙂

I know there are others as well who are also deserving so a large all encompassing thank you to everyone else who reads my blog, has commented on it, put me on their blogroll, told their friends about Rest is Epic, retweeted my posts or anything that has helped Resto is Epic grow and gain more readers 🙂 I am pretty sure I have still managed to miss people out so if I haven’t mentioned you by name, consider yourself thanked anyway 😀

Having no ability to give turkeys, I have instead have had this special piece of artwork commissioned from my youngest daughter to pass on instead of poultry goodness 🙂 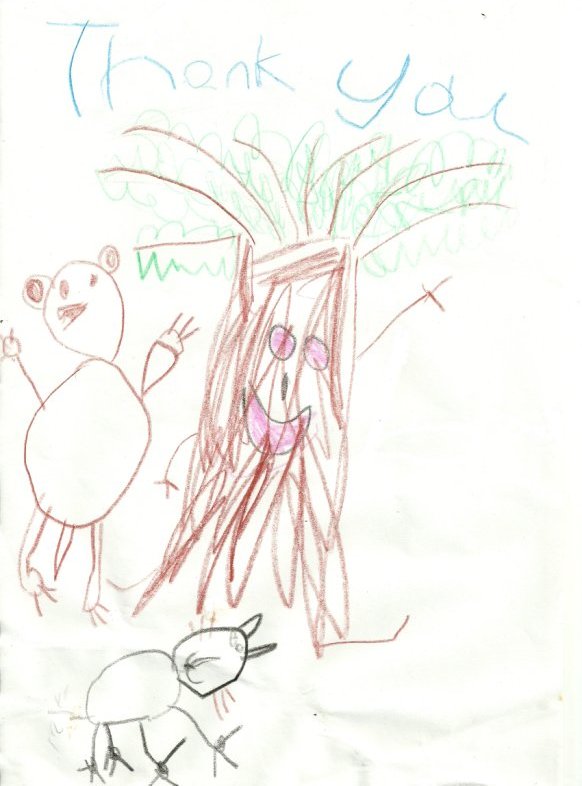 Yes, we have a tree waving, a dancing bear and a happy cat. No balance you say, well I did ask her to draw a boomkin and showed her what one looked like and she informed me that she couldn’t draw the “funny owl”, hence the blank space to the right of the tree. Sorry.

P.S. there was supposed to be a second, more vocal part to this post. However the inaugural episode of my new podcast won’t actually get recorded in time now (myself and my co-host seem to suddenly have had a very full and busy week ><) So the first episode won’t be recorded until Saturday, but there will still be a BATG 2011 mention to everyone :

Posted on November 23, 2011, in General, Thanksgiving. Bookmark the permalink. 13 Comments.

← 20 days of WoW blogging – My first day in wow
Mists of Pandaria: Talent and abilities preview →